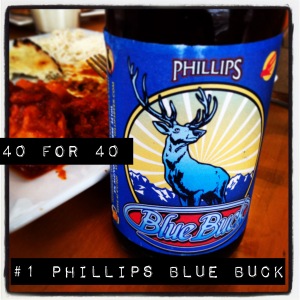 So a few posts back I gave myself the “task” of drinking 40 different beers before I hit 40.  Given that I have several months to complete this I may have sandbagged a little – but it is my birthday and I will drink what I wanna.  Having no idea how one reviews beer I consulted the experts – well, okay I googled it on the internet and here are the 4 Rules of Beer Review…

1 – Make sure glassware is clean.  Unless I am drinking out of a boot or a fishbowl we should be good here.

2 – Cleanse the palate.  I usually do that with a “cleansing” beer, don’t mind if I do…

4 – Look for appearance, smell, taste, mouthfeel (could they make that sound any more disgusting), and overall.

So I can follow rule 1 and 2…rule 3 can suck it, and I think I can follow the the criteria for rule 4.  So now that we have the standards set, let me introduce you to beer #1…Phillips Blue Buck.

In their own words, Phillips is proudly brewed in a little brewery at the bottom of a mid-sized island on the left side of a very big country.  Or in other words, Victoria BC – home of the Blue Bridge, blue hairs, and most importantly – Blue Buck.  I have tried many of the Phillips beers and they never disappoint but for some reason I never picked up the Blue Buck until this past week when I bought a Show Case Sampler. I think part of the reason I never picked up Blue Buck was because Phillips has some pretty catchy labels and the Blue Buck label was just not in my wheelhouse.  Anyway, fast forward to the part where I drink all the other beers in the sampler and take a run at this beer…here is where I get all official with my beer tasting rules.

1 – No glassware needed, I drank it straight from the bottle.

2 – I did some pretty intense palate cleansing making rule 3 null and void.

4 – Appearance…not a fan of the label artwork, but the beer itself looked all amber and delicious.  Smell…not too hoppy, not too malty…I am not gonna lie, I didn’t spend too much time taking in the scent here.  Taste…like the nectar of the Gods…assuming the nectar of the Gods tastes like a crisp, amber beer that has a hint of hops.  Mouthfeel…uh, wet…beery?  Overall, me likey.  Blue Buck is a great beer to start my 40 for 40; it does not have any funky aftertaste and it is a happy medium between hops and malt.

Final verdict on Blue Buck…I give it a “Don’t-be-scared-off-by-the-label-this-beer-is-freaking-awesome” out of 10.